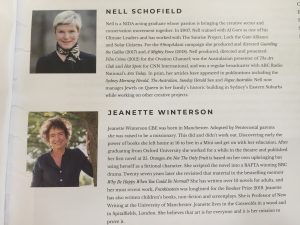 Late last year I was commissioned by Story Magazine to write an article about my experiences growing up in Sydney in the 80s. The piece was for the Paradise edition of this bi-annual publication published by Queensland Performing Arts Centre which was to stage David Williamson’s play Emerald City but due to the pandemic was cancelled. The play explores notions of Sydney as a place where dreams come true but also the thin veneer behind which they are also crushed. Paradise lost and found was the brief and as a close friend of Linda Jackson who work was being celebrated in a retrospective exhibition at the Powerhouse Museum called ‘Step Into Paradise’, I couldn’t resist including stories about our relationship in the article.

It was published alongside a piece by the amazing Jeanette Winterson who revealed that Paradise for her was at home. Have a read of my story here and let me know what you think!